In August 2014 I took a ride on a Road King (Harley Davidson) around Flathead Lake, Montana.  See prior post on the whole motorcycle trip! I intended to visit all the rock shops in the Flathead region that I had found on the web. The route was Whitefish to Columbia Falls, south on Rte 206 to Kalispell, on to Polson and then back to Whitefish.  What I found along the way is listed here for rock hounds and others who might be interested in purchasing finished or unfinished Montana Agate.

Montana Agate (from the Wiki site)

Montana agate is also called moss agate, because of the black moss-like inclusions, which are oxides of manganese or iron, usually on a milky white quartz background.  It is a form of chalcedony.  It is formed from volcanic rocks and abundantly found in the riverbeds of the Yellowstone river and it’s tributaries.

Montana Agate – outside skin of the rock

Montana Agate (see above) cut in half.

1. Junction Rock Shop (just east of Columbia Falls).  Some really nice finished slices of Montana Agate and lots of other pieces including fossilized dinosaur bones.  Not much unfinished rock in the shop.  The owner helped me out and I bought a very nice piece: black moss in a clear to white slice with no cracks.  It is a small shop with limited selection but great customer service.

2. Montana Within Rock Shop LLC.   Sandra Dahl and her husband collect rough Montana Agate in large quantities.  This is a great place if you are looking for rough rock to cut yourself.  They collect their rocks along the Yellowstone River, which is quite far away.  They know what they are doing!  They are difficult to find as they run their shop from their home, south of Columbia Falls.  Call because you will need directions!

4. Meneralholics LLC, on Melita Island Rd, near Polson MT, on the south end of Flathead Lake.  Definitely call before you visit them (Velvet Philips-Sullivan).  They are hard to find.  They do mostly B to B whole sale.  They have loads of rocks in large mounds in their back yard!   I bought as much as I could carry.

5. The Treasure Outpost in Whitefish.  This is a small rock shop (in the basement of another shop) in downtown Whitefish.  They have mostly finished pieces and very few pieces of Montana Agate.  Helpful staff. Caters to tourists rather than hard core rock hounds.

6. Rocks and Things.. Metaphysical, in Whitefish. Small shop with mostly finished pieces, some rough rock.  No Montana Agate.  Nice owner who also runs a Yoga Studio next door.  As I could not find what I was looking for, she gifted me a piece of rough rock quartz. Thanks  🙂

Check out our latest pendants made with Montana Agate here!

Rock Hound on a Motorcycle

On July 27th I flew to San Diego and rented a 1200 RT BMW motorcycle with 4 in line cylinders, a powerful bike with which I was going to cruise 2600 miles across California.  My friend Manu lives in San Diego with his Kawasaki Versys 650.  He picked me up at the airport and we went right to the beamer rental shop.   The next day we set out early, the first leg of a 12 day journey, all the way up to Arcata, CA, on as many scenic routes as possible and then back down along the coast.   We crashed overnight at the cheapest motels in town or at a friend’s house, but we had dinners every night at the best restaurant we could find on Yelp!

On our way south, in Carlotta, CA, we stopped at Chapman’s Gem and Mineral shop on route 101, also called the Redwood Highway.  This is paradise for rock hounds.  For a couple of dollars I bought snowflake obsidian, jasper, rhodonite and much more. Here are some samples. 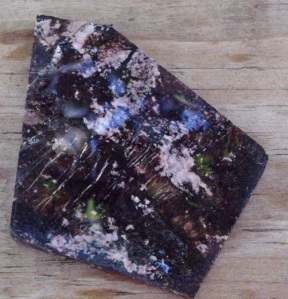 We stopped in Fort Bragg, CA, and we took the trail to “Glass Beach”.  This was a dump site for local residents, until 1967.  Now, in stead of sand, the ground is composed of small shards of smooth glass, ground extensively by the sea waves.  I had read about the place.  But we found the pieces of glass to be too small to use for jewelry. 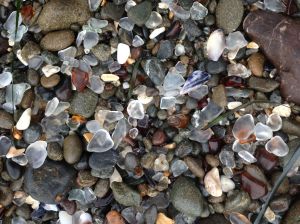 Rarely, one finds a piece that is larger than 2 cm.

We had passed places called ‘Topaz’, ‘Diamond Valley’ and ‘Emerald Bay’.  Each time I took note and looked for some explanation for the bejeweled name.  No success.  Not until we discovered ‘Jade Cove’ in Big Sur!  It lies protected

within a National Forest. It is easy to get to from Highway 1.  The green cliffs are composed of nephrite (a type of jade) and also serpentine.   Nephrite is a soft stone (Mohs 6) which is easy to carve and when polished it is vitreous and has an oily luster.  It can be very elegant with white to green to grey hues.  It was  considered an imperial stone in chinese dynasties.  Here are some of my samples.  And a finished piece with banded agate, from Chapman’s Gem shop, see above.

There is more to come about other adventures on this trip, although they have little to do with lapidary or jewelry.  Stay tuned!

Before I set out on this trip, my 17 year old gave me a penguin stuffed animal – a talisman to keep me safe.  Penguino, as we called him, became a pro at riding the motorcycle…

Most of us do not realize that diamonds come in different colors. The typical clear and sparkling diamond is what De Beers has marketed for 100 years or so…but if you want to own something truly unique consider this.

Diamonds have an extremely rigid lattice. They can be contaminated by very few impurities. Thus the clear, colorless appearance of those diamonds designated ‘gem quality’. Small amounts of impurities (about one per million of lattice atoms) will color a diamond blue (boron), yellow (nitrogen), brown (lattice defects), green (radiation exposure), purple, pink, orange or red! ‘Plastic deformation’ is the cause of color in some brown and perhaps pink and red diamonds.

In 2008, the Wittelsbach Diamond, a 35 carat blue diamond, once belonging to the King of Spain, fetched over US$ 24 million at a Christie’s auction.

“Black” diamonds are not truly black, but rather contain numerous dark inclusions.

White dwarf stars have a core of crystallized carbon and oxygen nuclei. The largest of these found in the universe so far, BPM 37093, is located 50 light-years away in the constellation Centaurus. The Harvard-Smithsonian Center for Astrophysics described the 2,500-mile (4,000 km)-wide stellar core as a diamond. It was referred to as Lucy, after the Beatles’ song “Lucy in the Sky With Diamonds”.

I was recently on ETSY, a site for handmade crafts including jewelry. I searched this huge site with about 250,000 virtual shops for ‘red diamonds‘. Click and take a look.

Gold ring with rough diamonds: 2 are yellow and 2 are red.

There are more red diamonds here.

If you are on Long Island, NY and you like beachstones here is an event you might want to attend:

This will be held at the Bayshore/Brightwater Library on Montauk Highway at
1 South Country Road Brightwaters, NY 11706, 631-665-4350
http://www.librarytechnology.org/lwc-displaylibrary.pl?RC=5247

The presentation will cover topics such as the beachstones of Long Island, their mineral nature and origin, and techniques used to tumble, drill and work with stones to produce jewelry. Both projected images and real samples will be used. 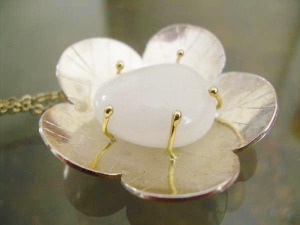