Rock Hound on a Motorcycle

On July 27th I flew to San Diego and rented a 1200 RT BMW motorcycle with 4 in line cylinders, a powerful bike with which I was going to cruise 2600 miles across California.  My friend Manu lives in San Diego with his Kawasaki Versys 650.  He picked me up at the airport and we went right to the beamer rental shop.   The next day we set out early, the first leg of a 12 day journey, all the way up to Arcata, CA, on as many scenic routes as possible and then back down along the coast.   We crashed overnight at the cheapest motels in town or at a friend’s house, but we had dinners every night at the best restaurant we could find on Yelp!

On our way south, in Carlotta, CA, we stopped at Chapman’s Gem and Mineral shop on route 101, also called the Redwood Highway.  This is paradise for rock hounds.  For a couple of dollars I bought snowflake obsidian, jasper, rhodonite and much more. Here are some samples.

We stopped in Fort Bragg, CA, and we took the trail to “Glass Beach”.  This was a dump site for local residents, until 1967.  Now, in stead of sand, the ground is composed of small shards of smooth glass, ground extensively by the sea waves.  I had read about the place.  But we found the pieces of glass to be too small to use for jewelry.

Rarely, one finds a piece that is larger than 2 cm.

We had passed places called ‘Topaz’, ‘Diamond Valley’ and ‘Emerald Bay’.  Each time I took note and looked for some explanation for the bejeweled name.  No success.  Not until we discovered ‘Jade Cove’ in Big Sur!  It lies protected 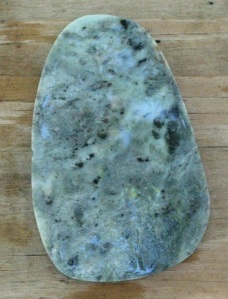 within a National Forest. It is easy to get to from Highway 1.  The green cliffs are composed of nephrite (a type of jade) and also serpentine.   Nephrite is a soft stone (Mohs 6) which is easy to carve and when polished it is vitreous and has an oily luster.  It can be very elegant with white to green to grey hues.  It was  considered an imperial stone in chinese dynasties.  Here are some of my samples.  And a finished piece with banded agate, from Chapman’s Gem shop, see above. 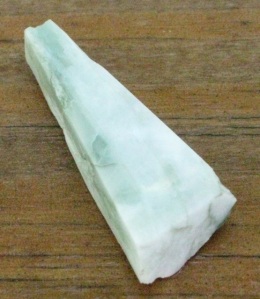 There is more to come about other adventures on this trip, although they have little to do with lapidary or jewelry.  Stay tuned!

Before I set out on this trip, my 17 year old gave me a penguin stuffed animal – a talisman to keep me safe.  Penguino, as we called him, became a pro at riding the motorcycle…