A friend recently pointed out that some jingle shells are rippled. She even wondered whether they were a different species! Others opined that the ripples were due to the mollusc adhering on a rippled substrate, for example on top of a scallop with pronounced ripples in its shell structure. Today I think I found some evidence for this on our beach. 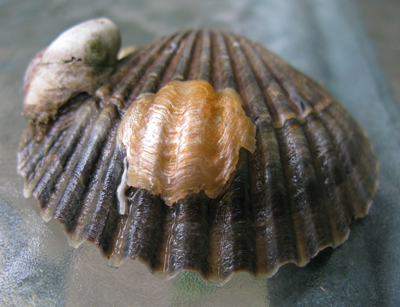 scallop with jingle and slipper shells adhering on top

The following are a few pictures of a brown scallop that had just washed ashore with still adherent orange jingle shell. Both the lower valve and the upper, orange valve of the jingle shell are rippled to closely adhere to the rippled structure of the scallop.

both jingle shell valves are rippled

Conveniently there was a slipper shell adherent on the same scallop, or rather 2 slipper shells, one on top of the other, as they often tend to do. The slipper shells showed no ripples. Even the margins in contact with the scallop had not assumed the rippled structure of the scallop.

How to interpret these findings? I would say that the Anomia simplex has resided on this very same scallop for a long long time and perhaps for its entire life! How else would it have assimilated the scallop structure over its entire shell structure for both lower and upper (orange) valves? By contrast, I think the slipper shell likely migrated on to this substrate and had previously lived on a different substrate. The jingle shell could be described as a “resident” and the slipper shell as a “migrant”!

I would welcome your thoughts!