I am back in Doha for the 9th time in 10 years. I’m writing about a day trip to the northern part of the Qatar peninsula which juts out in to the Persian Gulf, or as they say here the Arabian Gulf.  The destination was a place called Al Zubara, an ancient fort and an archeological dig.

I learned all about pearl divers today. A pearl diver stays underwater for 2 minutes. 1 min is for collecting pearls. They do about 50 dives per day down to 6-10m! To get down fast, they attach them selves to a heavy rock. After 2 min they are pulled up real fast by the guy in the boat. This can not be a healthy profession. Decompression sickness, dangerous critters… Al Zubara was an ancient pearl diving town.

The tour guide, Surya, picked me up in the ubiquitous V8 Toyota LandCruiser 4 WD. They don’t worry about gas guzzlers in this country. Gas is produced right here and it is cheap.   Our first destination was Al Khor, the 2nd largest city in Qatar. It is where a lot of gas company employees live. Surya is from Nepal and a great tour guide.  He works for Regency Travel & Tours. He is full of relevant information and good ideas about what to visit. In Al Khor we first went down to the commercial fishing harbor.

The old dhow boats fish with nets or with wire traps stored on top of the boat (similar to a lobster cage but much larger). The traps are used to fish for hammour, a type of grouper served in the top restaurants and considered a local delicacy.   Adjacent to the harbor is the fish market with about a dozen large stalls in

which all sorts of fish were laid out: “shaari” or “sheiri” (emperor), “suman” (type of grouper), “hammour” (grouper), “rabeeb” (trevally), “al kebeer” (barracuda), “jargoor”(shark), “taban” (tuna), “gabgoob” (crab). Gabgoob sounds onomatopoietic, doesn’t it?  I found this great website for English/Arabic fishnames!  They list hundreds of fish with all of their names in dozens of languages including not only Arabic, but also Telugu, Tamil, Malayalam, Kannada, Farsi etc.  If you are in a foreign fish market you may need to consult this site!

Next we visited the mangrove forest which grows all along the Al Dhakira bay, a protected area called Al Dhakira Natural Reserve. I could not really wade in for fear of getting stuck in the mud but you can visit this place on a kayak tour which sounds interesting! 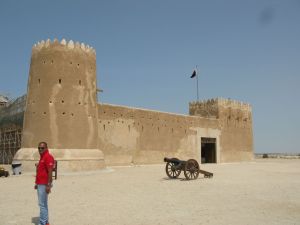 Our next stop was Al Zubara. The archeological dig site has re-exposed the ancient settling which was destroyed in 1811, and finally abandoned 100 years later to be covered by fine layers of desert sand. It was an Arabian pearl-merchant town for many centuries. The nearby fort is being renovated and houses a museum with lots of interesting artifacts, many related to the pearl diving trade. You can read more here.

Pearl sizing tools and a scale

On our way back to Doha, Surya and I chatted about Nepal where he is from, about the Indian and Nepalese expat communities in Qatar, about what it’s like to live away from your wife and children and only visit once a year, about his ultimate goal of returning to live in Nepal, and even about local politics in the region (always an interesting subject).  This was a great trip that I highly recommend if you are visiting Qatar.

This entry was posted in Jewelry, Travel. Bookmark the permalink.