This entry describes the beaches east of Atlantic Drive in Napeague (not to be confused with Atlantic Avenue in Amagansett).  You can leave your car at the end of Atlantic Drive.  That is just next to the White Sands Motel,which has been all over the local news because they have sued the town and the Trustees of East Hampton.  They want to ban beach driving in front of their motel and they are asking to have the beach privatized!  This is a recurrent problem out here.  But it applies to this beach, more than others, because of the heavy use of trucks in the summer, earning it the nickname: truck beach!

!If you walk a good 2 miles east on the beach you will reach the campground of Hither Hills State Park.  In the summer this place is mobbed and campers have to reserve a spot on the camp ground years ahead.  Apparently it is rare to find a campground on a pristine Atlantic beach as a nice as this one.

It’s an interesting walk.  There are huge dunes easily 30 feet high.  There are also very large clam shells (and some are intact).  We collect them and use them as soap dishes in the bathroom or the kitchen.

The beach is sparsely lined by motels some of which are discretely hidden by the dunes. These beaches and those to the west of Napeague are occasionally visited by seals, specially in the winter months.  But if you really want to see seals, you should visit Cupsogue Park Beach in Westhampton Beach.

There is a curious spot on the Napeague stretch beach, just west of the Hither Hills camp ground.  The beach narrows to a sliver: on a recent walk at midtide, the waves were lapping at the base of the dunes and it was tricky to pass this point without getting wet (see picture).

I wonder what it is that seems to cause such very localized remodeling and erosion of the beach.  It gets very technical, but there does seem to be a lot of local variation and an ever accelerating rate of erosion over the years, specially in places like Sandy Hook, NJ, where erosion of the beach was measured at 23 meters/year in the 1970s, up from 10 meters/year in the 1950s!

Beach Hampton refers, I think, to 1-2 mile stretch of dunes between the ocean and Montauk highway, east of Atlantic Avenue (Amagansett) and west of Napeague Sate Park.  This area is rather heavily overbuilt with homes on small lots, sometimes no more than 1/4 acre.  Because of the proximity to the ocean, even modest homes (without water views) are priced over one million dollars!  I guess that most of the homes are 2nd homes owned by weekenders.  The roads are often dirt or sand roads and one of them, Napeague Lane, leads to a small public parking lot where you can leave your car and access the beach.  This is not a busy summer beach (unlike Atlantic or Indian Wells Beaches). Mostly, it serves the people staying in Beach Hampton.  There is an interesting and current law suit pitting some owners of beach front properties against the town trustees and the issue is beach access, specially for 4-wheel drive vehicles.  Read more!

I like to walk east from Napeague Lane.  The next beach access is 3 miles away at Marlin Drive.  The round trip to Marlin Drive and back is a healthy 6 miles.

Initially you will walk along a beach bordered by beach homes and you can marvel at the hodge podge of architectural designs with traditional and modernistic styles side by side.  However, after 1 mile, there is a sign that you have reached the western border of Napeague State Park and from then on all you will see are dunes. 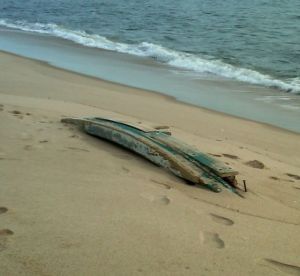 Stern of fishing boat buried in the sand

About 1/4 mile east of Napeague Lane, there is an interesting shipwreck along the beach (Jan 16, 2012), the stern of a fishing boat, half buried in the sand.  Nobody knew about it when I asked around. I went back to the same beach the next day to investigate.  The high tide had washed the sand away and the stern of the boat was more exposed. 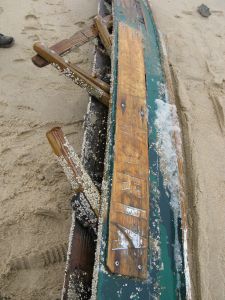 It measured easily 10 feet across and it was heavy, but my wife and I were able to turn it over to see the name of the boat etched on the back of the transom. We could make out __ORA MARIA or perhaps __URA MARIA.  I then searched the internet for shipwrecks with names like SENORA MARIA, DORA MARIA or LAURA MARIA.  I could not find anything.  As you can see the paint color of the boat was teal and the name was in white paint.  I will post more on this when the mystery is solved!

Just as a reminder, this was recently communicated to me by Steve Rosenthal (another beachcomber on Long Island). On 12/2/2011 NBC nightly news featured a story (see also patriotledger.com) about a tag from a Massachusetts  lobster trap that was lost in the 1991 “Perfect Storm” 20 years ago and which was found by a beachcomber in Ireland just recently. She used Facebook to trace the name on the tag to the fishermen’s son. Scientists estimate the tag traveled 3000 miles over 20 years before washing ashore.  It’s obvious to me, the DORA MARIA could have come from afar.

I also came across a piece of drift wood  which was an entire tree (!),  visible from afar.  It looked strange because there are no trees on Napeague. Otherwise the beach was remarkable for the absence of human foot prints (a virgin beach), patches of frozen sand (on a cold and beautiful January day), many dark red scallop 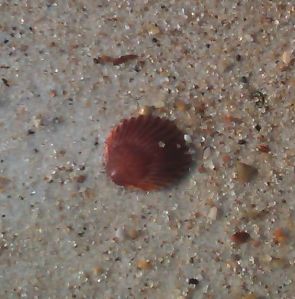 shells and blackened jingle shells, black moon shells and other shells.  I have noted the black color of jingle shells elsewhere on this blog.  I am quite sure that this color is acquired, as the shells settle in black mud at the bottom of the ocean.  Only miles away, on the bay beaches, the blackened shells are quite rare.  You can see areas of blackened sand too. And where the tides have eroded the beach, you will see layers of sand with alternating black versus light colored sand (see picture).

Just prior to arriving at Marlin Drive where there is a development of beach homes, I found bright orange clay discs.  These are targets used for skeet shooting. Along side were discarded beer bottles!  Guns and alcohol, hmmm… not a good combination. 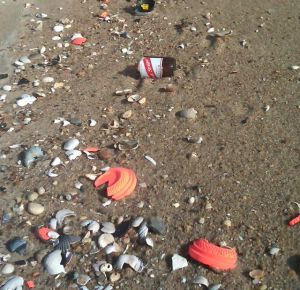 However, this was a beautiful day with calm waters and in the distance an out-rigged fishing trawler and dramatic cloud formations… 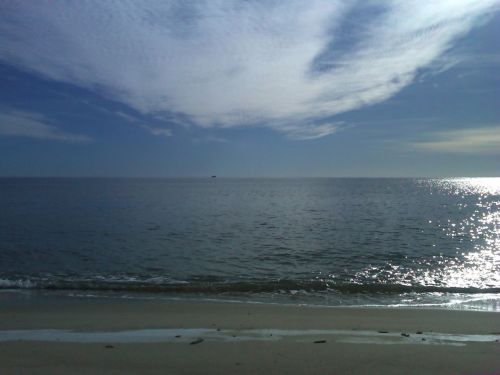 Out-rigged trawler in the distance

Leave your car at the large parking lot at the end of Atlantic Avenue.  There is a bathroom, open in the summer, and the bathing beach is staffed by life guards.  If you want to explore I suggest you walk east (you can walk for many miles).   The next beach access with a parking lot is at Napeague Lane, about 1 mile east.  This is another fantastic Atlantic ocean beach.   It is a favorite swimming beach in the summer.  If you are going to swim beyond the permitted area with life guards, you should be aware of rip tides.  Every year there are victims along the south shore beaches of Long Island.

If you are walking the beach and searching for treasures you can find the occasional sand dollar (look at this cool video) or other  interesting shell.  Last time I was there, I found some whelks on this beach, but they were not the usual knobbed or channeled whelks that we see on the bay beaches.  These were common whelks.   There are 4 main whelk species on our shores: common whelk, channeled whelk, knobbed whelk and lightening whelk. I have added some pictures.  I have yet to find a lightening whelk.  They are coiled sinistral (clockwise) while all the other species are dextral (anti-clockwise).  These are interesting carnivorous animals with a highly developed sense of smell for both their prey and their predators.  They are edible and in many countries, like Japan, they are considered a delicacy.

In some places they have been over-fished by commercial fishermen.  On Long Island, it’s mostly sea gulls that fancy eating whelks.  They will pluck them from shallow waters and then drop them on a paved road to crack their hard shells. I see this in the summer.

Quite fascinating is the relationship of common whelks and starfish. Apparently, starfish are predators for whelks, yet the bolder whelks like to hang out around the starfish apparently waiting for left-overs as the starfish tackle prized prey such as mussels! 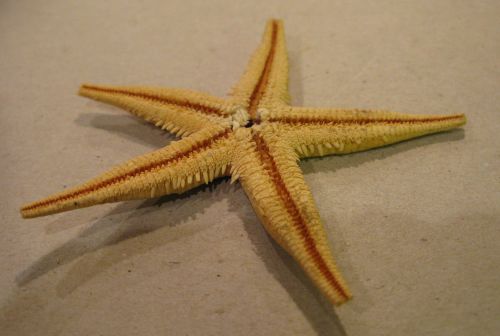 Starfish on its back

This entry describes the 1 mile stretch of beach between Indian Wells and Atlantic beaches. You can leave your car at either end.  Both beaches have large parking lots.  In the summer you will have to pay a fee to park your car. Otherwise you just need the East Hampton town beach sticker.  This is a beautiful beach quite like all the other Atlantic beaches.  In the summer it is crowded and a prime bathing beach staffed with teams of life guards near both ends.   Off season, this beach still attracts surfers.

This picture below was taken on a cold day in December!  The beach borders on The Amagansett National Wildlife Refuge.  This is a unique refuge preserving a double dune system and multiple plant and animal species.

In December we found some intact moon shells, and scallops, but mainly drift wood and the ubiquitous skate egg cases.

Of the seven skate species, that live off our shores, the Little Skate (Leucoraja erinacea) has the greatest density close to the East Hampton Atlantic shoreline.

Check out these links 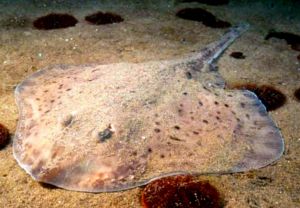 to learn more about skates in our region. 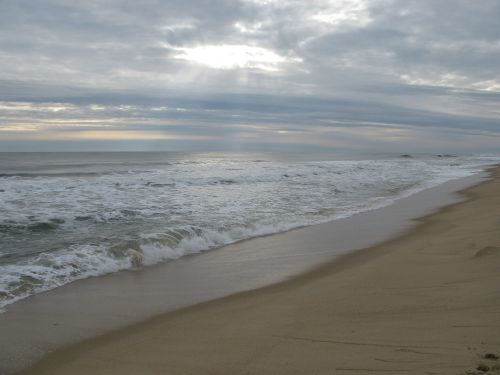